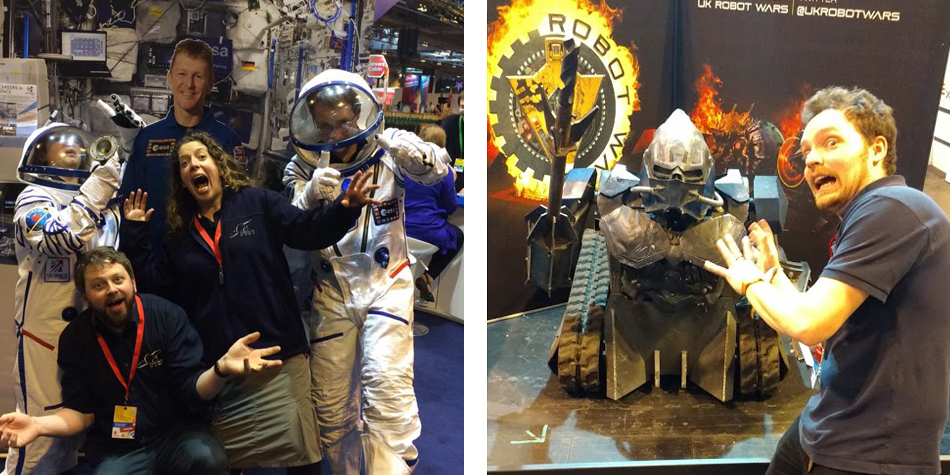 Building on the success of 2016’s Life in Space shows at the Big Bang Fair, Explorer Dome proudly presented our Life of Water show for the crowds at the 2017 Big Bang Fair, in Birmingham’s NEC

Even with hundreds of attractions ranging from the hilarious Festival of the Spoken Nerd to the actual Sir Killalot from Robot Wars, Explorer Dome was clearly a big hit with the crowds; over 1000 people poured into the dome over the two days. The Big Bang Fair itself is almost indescribably huge in scale, with around 80,000 visitors flooding the exhibition space over four days and 10% of all UK secondary schools registered to attend

The show itself was a streamlined version of our full Life of Water show, originally developed with the support of the Royal Society of Chemistry, but featured all of the beautiful visuals of our digital dome system, plus of course our trademark hands-on excitement, including our Hoffman Voltameter, which splits water into hydrogen and oxygen gas. The two gases are then recombined with a spark and then... water explosion!

The team of Alex, Dave, Josh and Jim are now somewhat frazzled after their efforts over the two days, all their tired minds are now able to do is put water-based puns into blogposts… How many dew sea?

Back to News
Back to top